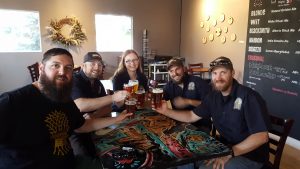 Our team enjoying beers during the “Hump Day” celebrations at Village.

About two years ago, while we were in the very beginning stages of planning the brewpub (including the planning of our move from California to Calgary), we were researching our “competition” in Calgary — many of whom are now good friends. During that research we happened upon Cold Garden Brewing’s blog. At that time they were at the stage we are in currently: building, waiting on equipment, figuring out finances and all the other fun that comes during start-up. In one post, she pauses to tell a story of meeting Jim Button of Village, socializing at the brewery and about how friendly the craft beer industry is. During the story she tells of how at the end of the evening, Jim dug around in their utility closet to pull out a red card table, giving it to the folks of Cold Garden. 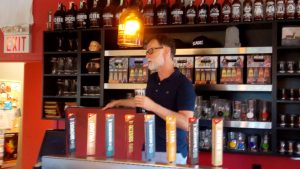 Jim Button telling the story of the card table that was their first board room table.

And so the journey of the Beer Planning Table began, an object that has been gaining a reputation in the local brewing community. Village was a startup not so long ago and when they were just getting started one of the team brought in an old card table to act as their board room table. It seemed to have brought the brewery luck and good fortune and Jim wanted to pass that on to another startup — and that startup was Cold Garden. Once we heard this story we became even more excited to be a part of and nurture the craft beer community in Calgary.

Once Cold Garden opened and found some success they, with Village, decided to pass it along to a new startup, choosing Common Crown as the next recipient. We have become friends with the guys up at Common Crown and can’t say enough good things about them. A couple months ago we were at a cask event supporting some amazing local breweries when the fellas at Common Crown pulled us all aside with Jim Button to tell us they had discussed who would be the next recipient of the beloved beer planning table, and they had decided on us. 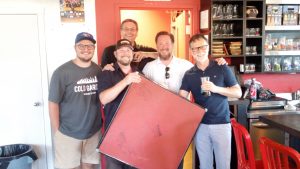 A few of us may have jumped up in giddy happiness that these other breweries see us as worthy of the table, or maybe they think we could really use the luck and good fortune that tends to follow the table! 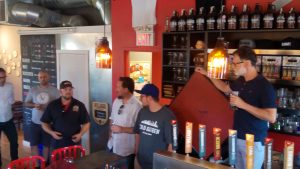 Gerad talking about our brewpub and accepting the table.

Village hosted us during their “hump day” on September 6th with folks from Cold Garden and Common Crown. Jim told the story of the table and Gerad spoke about our brewpub plans and who we are. He also took the responsibility of drawing our name on the table top. It is an incredible feeling to know that these other breweries have confidence in us and in our potential for success. 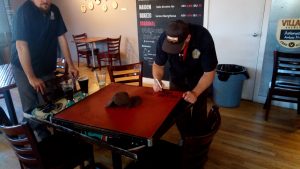 Gerad making our mark in the table.

Something we have learned over the past year and a half is just how wonderful the craft beer community is in Calgary (and everywhere really); the people who are supposed to be competitors collaborate with each other and contribute to each others’ success. When we set our sights on Calgary as the location for our brewpub we envisioned ourselves working closely with other local breweries to foster a community that wouldn’t view each other as competition. We had no idea at that time if people would be receptive, heck, we didn’t even know if there would be anybody to work with! But we are so happy to see that Calgary’s beer scene is growing faster than any of us imagined, and that breweries like Village are working to build a community just as we envisioned ourselves doing one day. We are honoured to be the next recipients of this table, which has brought so much luck to our friends at Village, Cold Garden, and Common Crown, and we hope that it brings us as much good fortune as it did them.

The object of beauty and fortune!

The team each signing our names to the beer planning table in its new home at our brewery.